The 2018 William Hill Darts Championship, is over, but fans and enthusiasts from all over the world are still reeling from the action and excitement that came with the game. Held at the Alexandra Palace in London the tenth of its kind to be held at the venue, between the 14th of December 2017 and 1st of January 2018 the 25th world championship put together by the governing body provided a scintillating end to the 2017 PDC season and an exciting start to the new year for both followers and players of the game.

The tournament featured 32 seeded top players on the PDC ranking system while 16 international and invitational players competed in a preliminary round to qualify. 16 top ranked players and another 8 high ranking players drawn from the 2017 PDC pro tour and from a number of invitational qualifiers respectively brought the number of total competitors to 72.

The game paraded a number of big names such as Michael van Gerwen, the 2014 and 2017 championships winner was the top seed for the tournament. Phil Taylor, fourteen times PDC world champion eyeing a possible final win of his career before retirement; and former champions like Gary Anderson, Raymond van Barneveld, and Adrian Lewis all top-seeded.

Also debuting and aiming to make their mark on the game for the first time were new players which include the likes of Seigo Asada, Willard Bruguier, Ted Evetts, Cody Harris, Luke Humphries, Kai Fan Leung, Alan Ljubić, and William O’Connor among others. 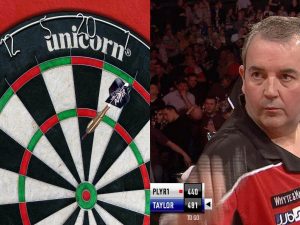 Reigning champion Michael van Gerwen was on fire in the early rounds of the tournament knocking out fellow Dutchman Christian Kist and defeating James Wilson, without losing any of the twelve legs played, he then beat Gerwyn Price, to set up a quarter-final with fellow Dutch and former world champion Raymond van Barneveld which he defeated 3–1 in a deciding set to qualify for the semi-final after the initial sets ended in a draw. He, however, lost in the second semi-final to debutant Rob Cross