Gary Anderson made a stunning comeback after coming from 4-1 down to defeat Corey Cardby by 11-7 and win the 2018 UK open darts championship. Anderson who defeated the less experienced Cardby in a much contested and exciting matchup claimed the £70,000 grand prize while his opponent went home with £35,000.

Cardby who had an interesting run in the competition despite being his first appearance in a televised final defeated Michael Rasztovits (10-5), Martin Schindler (10-7), Chris Dobey (10-7), Gerwyn Price (10-6), and Robert Owen (10-3) to set up a final with Anderson. 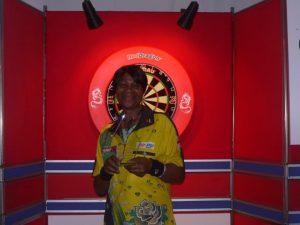 The competition which started on a rather disappointing note for darts enthusiasts on Friday 2nd till Sunday 4th of march with millions of eager fans denied access into the Butlins resort in Minehead the venue of the event due to severe UK weather. The big freeze not only condemned fans to watch the events via the only TV but also forced seven players to withdraw from the tournament on Thursday.

Rene Berndt, Andrew Davidson, John Goldie, Mick McGowan, William O’Connor, Maik Langendorf, and Scott Robertson who were all gearing up for the big tournament did not get to feature as heavy snowy conditions prevented them from getting to Somerset giving their opponents a bye for round one or two.

A statement signed by Butlins read: “Due to the unprecedented extreme weather conditions, we have regretfully decided to not allow guests to attend this weekend’s PDC Coral UK Open at our resort in Minehead, Somerset, for safety reasons – however, the tournament will take place behind closed doors and be broadcast on ITV4 as scheduled. Guests already on our resort can be assured their accommodation will be available to them until it is safe to travel home.”

Gary Anderson who put up a great show throughout the tournament beat Robert Rickwood (10-3), Ricky Evans (10-3), and Jermaine Wattimena (10-6) to reach the quarter-final where he put away Rob Cross to set up a semi-final match with 28-year-old David Pallett a grueling match he won 11-7.

Anderson, the Flying Scotsman and a two-time champion secured his place as the fourth ranking player in the PDC merits ranking system while his 22-year-old opponent in the final is a fast-rising darts star who had just won his first ever PDC tour card two months earlier and ranked 53 on the world’s top 64 list going into the tournament.

The competition featured 128 stars and featured several big names in the game.

When you think of a word pub, there is a fair chance that some of your first associations are a pint of lager, drunk patrons cheering for their
Bad Authentication data.